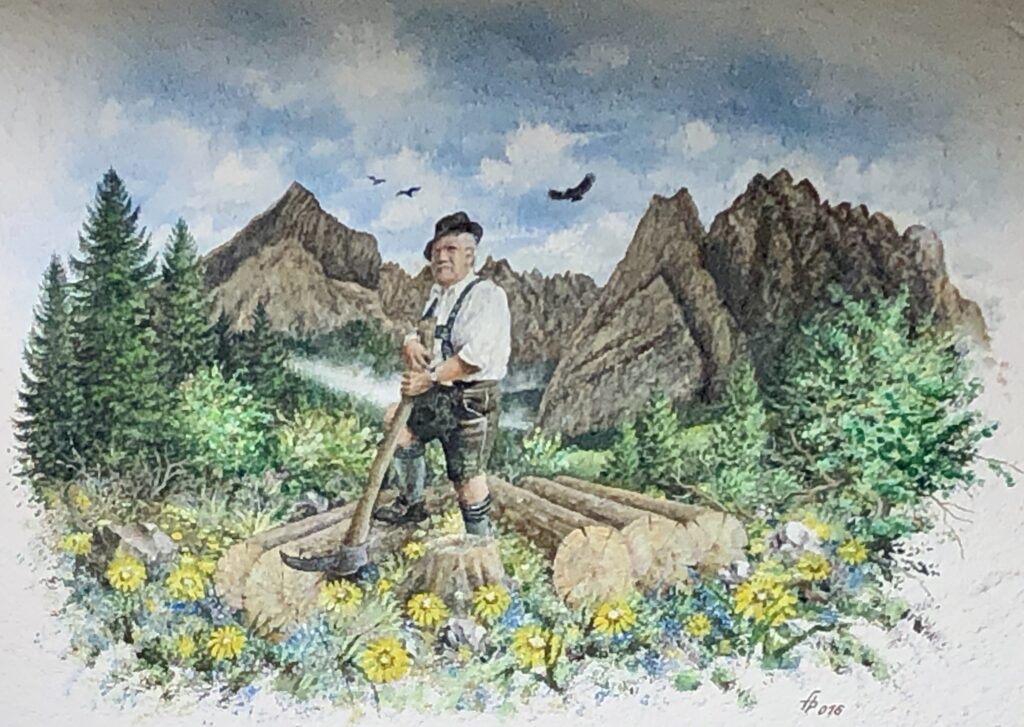 The Mysteries of the Lüftlmalerei in Oberammergau

My wife and I moved to Garmisch-Partenkirchen in March of 2019.  I like to tell people that before coming to Germany, I worked in a very square job in one of those very square states in the U.S. – I was a lawyer in Colorado.

Before we moved to Bavaria, neither my wife or I knew very much of anything about Germany — let alone how to speak German.

So, like every tourist who visits the German Alps for the first time, we couldn’t help but notice how very Bavarian it all seemed. The towns here are like something out of a fairytale, with old cobbled streets, people really wearing lederhosen, and even the ruins of an ancient castle on a nearby hill.

Like every tourist, I found myself quite literally stopping when walking just to take pictures of the buildings. Every farm house seemed to have a saint painted on the outside, every business seamed to have the façade of a Renaissance church, in fact, it seemed that every visible wall was frescoed like the ceiling of the Sistine Chapel.

And, like every other tourist, I signed up for a number of local guided tours.

It was on one of those walking tours that I learned that many of the murals here weren’t simply beautiful decorations for tourists to snap photos of, but that they actually meant something. Each mural, called a “Lüftlmalerei,” told a story – either scenes from the Bible or the lives of Saints, or just something personal to the people who lived here.

Curious, I went to the tourist offices in Oberammergau, Mittenwald, and Garmisch, thinking, that if they offered tours on the topic, they must have more information about all of these “Lüftlmalerei.”

And they did have maps that highlighted some of the more interesting buildings and walking streets to see these murals, but, they told me, there was no complete listing, no museum-like guide to all the artists or their art.

That, they said, was something only the tour guides knew.

But how did the tour guides know? I wondered.

When I inquired at one of the local libraries, in broken German, pointing to the scroll of pictures I’d taken on my phone in an effort to explain to the librarians what I was looking for, I only found a few books on the subject. And, although the folks who worked there were all pleasant and helpful, despite my inability to speak their language, the books they had, besides being written entirely in German, only mentioned a few artists, only listed a few, select murals, and, worst of all, were all incredibly out of date.

So, still curious, I started counting the the murals I passed on morning jogs around town. If I came upon a new one, I’d stop, sweaty and panting, to take a picture of the building with my phone.

After a few weeks, I’d collected some 300 pictures.

It was about that point that someone actually stopped me while I ran – a couple of young workmen stepped out in front of me with their hands waving in my face, pointing at me to make me take the earbuds out of my ears.

Just what, they wanted to know in terse German, was I taking pictures of their house for?!?!

I apologized, and, not knowing the words to explain, I watched as their angry faces turned to bewildered surprise as I scrolled through my phone for them, just like I had for the librarians, and all they saw was picture after picture of Lüftlmalerei.

Then they apologized. They said, they didn’t realize I was just some hapless American. They thought I was a burglar, casing their place and looking for security cameras or weak windows.

“We thought you had long fingers,” one said, in English.

That’s how I learned that, in German, pickpockets have “long fingers” – fingers that reach for things that don’t belong to them.

A few times, though, I was lucky enough to find someone outside their home – just sitting in the sun, or gardening, or just getting out of their car.

One such woman was kind enough to let me take her picture next to the mural on the outside of the house she inherited from her mother, a Lüftlmalerei of Saint Elisabeth.

When I asked her why this particular image, why her mother had gone through the expense of paying an artist to paint it on the outside of their home back in 1981, she just smiled and shrugged and said, both she and her mother were named Elisabeth.

Another fellow I ran into explained that a friend had painted his own image on the wall where a window ought to have been, holding a beer beside his daughter.

He told me his name was “Ludwig,” like the king. He said the two not only shared the same name, but that they had the same birthday, and, while his daughter had since grown, his beard had shrunk.

It was his son, he said, who painted the scroll-work around the windows – not just at his house, but also on the house next door. He was not a professional painter, though, his father beamed. “Just for a hobby.”

And, no one I met was more proud of their mural than the fellow who insisted, if I was going to take a picture of the one on the side of his house, he would pose in front of it.

He told me his name was Franz. He spoke no English, and my German was worse.

What I understood him say, was that the artist who painted this for him, did it for the experience and some drinking money. When asked what he liked to do in his free time, Franz had told the artist he liked wood working. The image the artist painted, then, was a picture of him as an Alpine lumberjack.

Franz was very enthusiastic to speak with me, even though we didn’t speak the same language.

He smiled but scolded me, saying, if I was going to live in Germany, I ought to learn to speak German. And then he laughed, telling me a story entirely in Bavarian.

It wasn’t long until I started to meet some of the artists who actually painted these beautiful works, too.

Artists like Otto Ertl from Garmisch-Partenkirchen, who has been painting Lüftlmalerei on the buildings there for more than half a century.

After a while, I desperately wanted to share what I had been learning about the artists and paintings they had made with people who might not even know this art form even exists. I began to think very seriously about writing a book of my own — a guidebook, perhaps, or maybe a walking tour of the town.

But I didn’t know anything about publishing, let alone writing a book.

So I decided, instead, I’d start simple.

Well, within a year, that blog ballooned into an encyclopedia – into a nearly comprehensive collection of ALL the Lüftlmalerei in Garmisch-Partenkirchen and Oberammergau. (With nearby Mittenwald, Grainau, and other towns still forthcoming.)

Today, my website remains a work in progress, but I have finally gotten around to publishing something – not just a guidebook, but something interactive and enjoyable for anyone to appreciate and understand. A book meant to be scribbled in, not just read.

Unlike the folks I just happened to stumble upon working outside while I walked past, Frau Dikova was kind enough to talk with me on the phone, telling me all about the history of the art on the walls of her Gästehaus Eder (https://www.oberammergau-erleben.de/gaestehaus-eder/).

I told her about the coloring book I had in mind for Oberammergau, and she asked if I might write something for her blog, dedicated and passionate as she is to share all things  about Oberammergau with the world.

I said I would be happy to, as it is my absolute pleasure to share the beauty and the magic of these murals with anyone who’s interested.

I hope that everyone enjoys learning about them as much as I do.

PS: Justin’s books can be ordered directly via: https://lueftlmalerei.com/contact/

Or via
Amazon Germany: 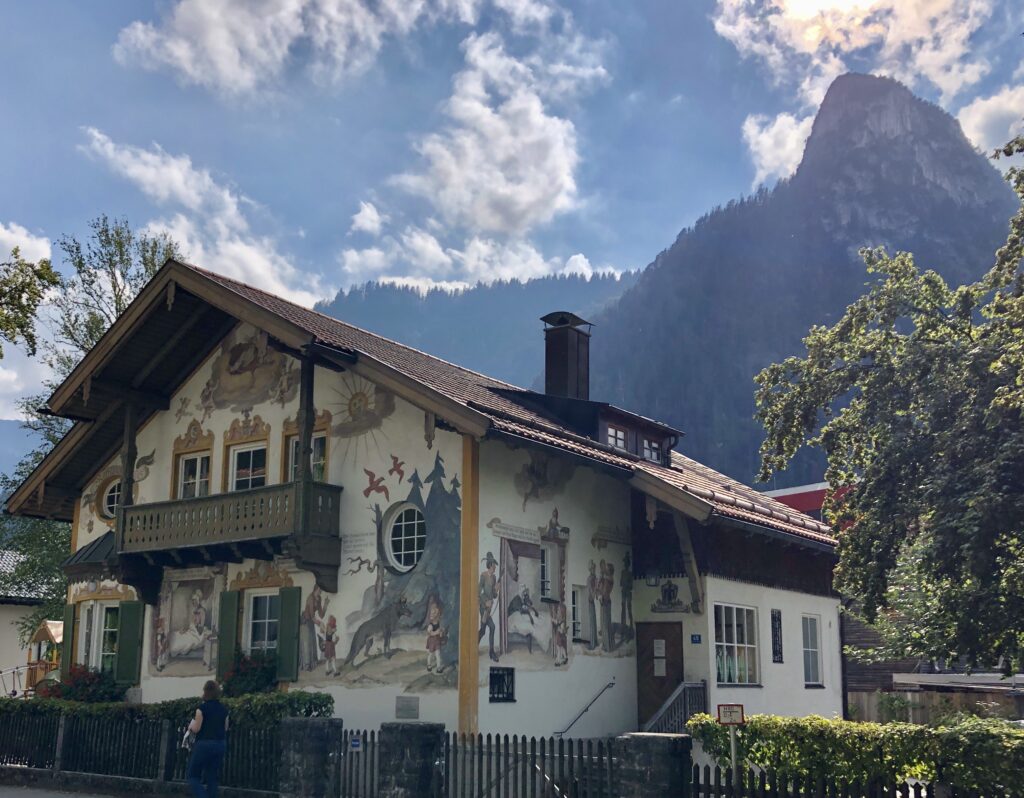 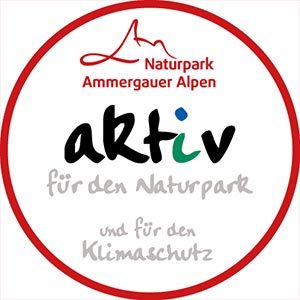 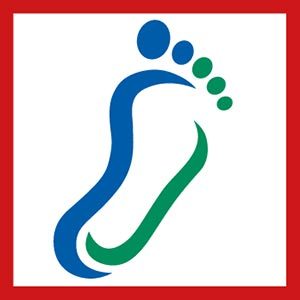 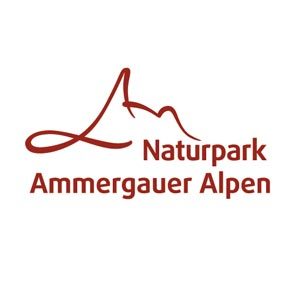 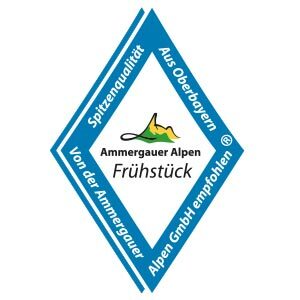